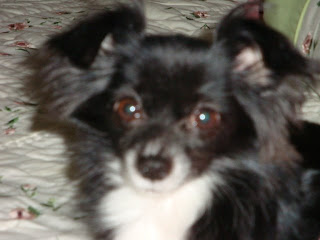 He’s a five-pound, long-haired, black and white Chihuahua who thinks he’s a fifty-pound Doberman. Although Domino is one of the smallest of God’s creatures, he has a big heart and a personality to match. Since acquiring Domino in September of 2007, I’ve taught him a couple of “tricks”. One of these tricks is “dancing”. With a tasty training treat in one hand, I coax him up into a hind-leg stance, and watch him go into what looks like spasms. They are really jigs of joy as he “dances” around and around on his tiny hind legs, whirling and twirling, working so hard to earn the coveted treat. Another is our "high five" trick. From a sitting position, and with a training treat nearby, I excitedly command, "High five! High five!", at which time he leaps up with his two paws matching my two palms in a gesture of love and solidarity. If you ever see Domino and me, ask us about this special trick! It's hilarious.

Domino has beautiful, symmetrical markings. While he is almost all black, he sports four white, tiny paws, and a white chest and belly. The white hair around his neck reminds me of a bow-tie – it’s just that symmetrical! His large, brown eyes sometimes look almost human, and he often gets away with his pranks because of those lovely eyes. Domino’s tail is large and bushy, and can often be seen wagging in pure delight of just being with his mistress.

His personality is just as charming. He is mostly a docile dog, but he gets excited in the mornings when he wakes up and again when I arrive home from work. He scampers around, belly on the floor, tail wagging ninety miles a minute, happy to see me, ready to play and perform his tricks.

Domino’s favorite activity – if it can be called an “activity” – is to lie in my lap in the recliner of my bedroom. There he is perfectly contented to lie in the crook of my knees while I read, watch TV, or nap. Often we cuddle and have what I call a “love fest”. I rub, rub, rub his little perfectly rounded head; his white chest and belly; and then finally behind his soft, fluffy black ears. I think he likes those love fests better than eating! He is a very special dog, and not just because he’s mine, but because he is one of God’s creation.
Posted by Library Lady at 2:19 PM

I'm so glad you have Domino. It's funny b/c he sounds so much like Lefty. Lefty does the same "dance" for treats. Pancho cant balance that well and doesn't really like treats that much. Pebbles observed Lefty getting treats and she started turning circles (but not on her hind legs). Lefty also does high fives like that...Kimmie taught him that one. He lives with Kimmie now and just adores her. HE cries and howls if she leaves him here for a while. It was good because he was still nursing on Pebbles after 3 years!!! Have you seen the chihuahua movie? I've heard there is a dog like Pancho who is leader of the pack...and Panch is definantly our leader of the pack. I think I may have found a good home for Pebbles at my mom's friend in Corpus. I just need to figure out a way to get here there. I think two less dogs will maybe help all Dean's allergies. Thanks for sharing your blog! Put a picture of Domino on sometime...

How interesting that Lefty does some of the same things as Domino!
Both dogs are very needy, too. Clinging, in fact. When I had Lefty, it was not Lefty that was the problem. It was ME. I was not ready or able to care for another living creature. Domino and his situation came at the right time for me.

It's been a fun journey with him, and after a year of training, he is a most enjoyable companion.

Much luck with finding good homes for the rest of your pack!

Library Lady
By profession, I am a librarian and musician. I hold a Bachelor of Music in piano performance from Southwestern University (Georgetown, TX); a Master of Music in Piano Pedagogy from Texas Christian University (Fort Worth, TX); and a Master of Science in Library & Information Sciences from University of North Texas (Denton, TX). I am fortunate to earn my living while working in my two chosen fields. I am a librarian for a private Christian school in Fort Worth, and serve as an accompanist for a Methodist church in southwest Fort Worth where I also maintain a small, but select piano studio and live with my beloved Chihuahuas, Domino and Lady. On March 15, 2010, during my Spring Break, I married my high school sweetheart, with whom I reconnected during the 2009 holidays -- thanks to the Internet! After over 36 years, we've found our love once again! "First love, second chance" definitely describes us!!! On March 31, Teddy and I welcomed into our home another Chihuahua! Lady is a 2 year-old, short-haired, fawn colored, female Chi. Thus far she is living up to her name and is a sweet Little Lady. Our family is now complete!!!